skip to main | skip to sidebar

The wind and the lion

Well, actually there was no lion (I just happen to love that movie), but there was a helluva lot of wind. Based on our weather forecast I moved a few things around and did Fri's 30K TT today. This would have been a great idea had I got out in the morning before the wind picked up, but my bike shop of choice doesn't open until 1pm on Sunday's. You'll recall (since I know you all hang on my every post) that I had a front derailleur issue, as well as realized I was given a generic set of rear gearing when I paid for SRAM Red. So... I was at the shop right at 1, and they promptly fixed the derailleur and found me a nice shiny new set of Red 11-23 gearing (also picked up Liz's new pedals and a new tub of chamois butter- the tingly kind ;-) From there I drove out to Haines Point to ACTUALLY RIDE OUTSIDE. If anyone here has run the Marine Corps Marathon, you're familiar with the Point. It's a nice 3.4ish mile loop with minimal traffic (other than cyclists, roller bladers, and runners). You can extend the loop by about 2 miles if you ride the back straight out to the Lincoln Memorial and back.

But I digress- I hopped on my bike for my warm-up lap and enjoyed actually riding on the road for once. This lasted for about a mile until I made the turn up the back straight and turned into the wind. Holy Schniekies! The front straight is relatively protected, but the back straight is open to the Potomac, and if there is any wind it tends to be a direct headwind. I went from a cool 20ish down to about 13-14, and it was gusty and increasing. On the bright side, my new gearing was smooth like buttah, but it wasn't doing much in the way of calming mother nature. I gave it a total of 12ish miles as the wind steadily increased (speeds varying between 12mph into the wind, and 26 without the headwind).  I was almost blown over twice, and I saw a smaller lady trying to come to a stop get completely knocked over on her nice shiny P2C (I stopped and talked to her- she was fine. Just a bruised ego). That's when I called the quits and headed home to finish my last 10K on the trainer. Blech. Total time 1:02.49.
Posted by Mike at 7:15 PM No comments:

10 burpee's, 5 push-ups, row 500m, as many rounds as possible in 20 min. Since my gym isn't set up for this (no room next to the ERGs) I had to walk to an adjacent room for the burpee/push-up combo. Got through 5 complete rounds, plus the burpee/push-up part of round 6. I gave myself an extra 30 sec to account for the room transit (total time 20:30), but probably should have given a bigger cushion. Anywho, round 5 on the ERG (Excruciating Rower Getup?) was definitely the closest I've been to puking yet. Part of me kinda wants to let loose and freak out the people reading their books on the ellipticals. Is that so wrong?
Posted by Mike at 10:09 PM 2 comments:

The pool is finally open again

Actually, it probably re-opened last week but I was out of town. Apparently the news got out because there were 4 or 5 people per lane as soon as it opened at 0630. I do appreciate the need for the aqua-walker-aerobic-non-swimmer types to have some space, but do they really need to close off 3 lanes worth of real estate for 2 people? I'll never get that. Anywho... Warmed up with a 10min brisk walk to the pool and 2x50, and then set in. For a 1000yd TT.  1st 500 in 7:56, second in 9:11, for a total of 17:06. Not too bad, relatively speaking.

ETA- Damn. Fran (that evil b*tch) kicked my ass. Suspect it had to do with my lackluster diet today, combined with those ridiculous ergonomic pull-up handles that allow neither kipping nor adjusting hand position, but I had little to work with in the tank. Finished in 15:10.
Posted by Mike at 7:56 AM 1 comment:

May have screwed this one up?

So, after almost a week of missed workouts due to convalescing child and travel, I jumped right back on the horse this morning. Read the workout last night (cycling)- Bike 1 mile, rest same time, bike 2 miles, rest same time, etc, up to 5 miles and then back down. A typical "ladder of pain" based on distance instead of time. My wifes alarm went off at 0445 for her x-fit class, and I began to marinate over the workout as I failed to fall back asleep waiting for my 0530 wake-up. Lets see... 20mph on the trainer (optimistically), a total of 30 miles for the workout = 1.5 hours, plus that same time in rest = 3 hours, plus warm-up and cool-down = 3.5 hours... no friggin way this was going to happen before work, and not even my combined TiVo'd Olympic coverage and Jersey Shore repeats could help me make it through 3.5 hours on the trainer without the serious contemplation of, well, some not very nice things. Snookie would have most definitely wound up with another black eye. So during the 45 minutes of sleep I lost waiting for my alarm I convinced myself this must be a typo, or at the very least a misplaced weekend workout (my ability to justify things in that pseudo-awake state is truly impressive), and opted to replace the miles with minutes in order to fit it in before work. I wound up with a nice excruciating 60 min main set, but still feel like I cheated myself out of the other 2.5 hours.

Incidentally, my front deraillure slipped down and would not allow me to ride in the big ring. Not wanting to get out of the workout zone I made a quick fix without re-positioning the cable and screwing around w/the limit screws. Normally I would permanently fix this myself post-workout, but as I was down there I noticed another issue. When I bought the bike it came w/full SRAM Red, to include the rear cassette. I had the dealer swap the cassette to the gearing I liked, and just realized they replaced it with a generic brand, which may explain some of my mis-shifting. Not for nothing, but given the cost of Red, I'm going back and making an issue of it. And while they are re-swapping out the cassette, they can tune up and re-torque the bike. Dammit :)
Posted by Mike at 11:53 AM 2 comments:

Reality can be a bitch sometimes.

Thought for the day: I absolutely love the winter Olympics.  From the time I was able to walk I've been skiing, and for someone who is from the East coast, I was pretty damned good back in the days of Bill Johnson and the Mahre brothers. I still jokingly blame my failure to make the US team on my parents for not sending me to a downhill training camp I wanted to attend at Whistler-Blackcomb when I was in my early teens. (You reading this mom and dad :-) I Tivo'd the opening ceremonies to use on the trainer this morning, so I didn't know about the Georgian luge athlete who died on the course yesterday until I was riding. It was a very sobering moment for me, and is still resonating hours after the 10 min spot on NBC's coverage.  Knowing what I (we) go through as pure amateurs to realize my (our) goals and thinking about what he must have gone through to be recognized as one of the worlds best- watching him crash and his life end in a split second was heartbreaking. I'm not a religious person, but if I was my prayers would be going out to his family, friends, and team.
Posted by Mike at 11:09 AM 1 comment:

Snowmageddon, SnOMG, Snowpocalypse, or whatever else you want to call it.

Apologies to all- I haven't had a chance to see what anyone else has been up to before I'm writing this, so forgive me if I'm re-stating the obvious about how much this weather does not foster training. At least not here in DC where I'm not sure if the local gov't can distinguish dealing with some snow from an all out invasion from outer space. Meaning whatever form of media you choose to watch/listen/read, there is only one story- how debilitating the snow is. Now don't get me wrong. I love this. Absolutely love it (and so do Liz and Moose). But, the pool is closed (I couldn't get there anyway), running outside is a non-starter (even if my foot was healed), and unfortunately my internet still works so I have been putting in 10+ hour workdays when the rest of my social circle is off sledding, drinking, or whathaveyou (I REALLY need a new job. Seriously). That said...

Today was 4 rounds of 25# kb swings (21x) and knee's to elbows (21x). The kb swings were no problem. The knees to elbows (k2e), on the other hand- yowza! I made it through the first round fairly intact, but the following 3 rounds were somewhat modified, in that I did them as best I could, but they weren't even close to what the video on th CF site looks like. Actually, it kind of turned into a hanging knee raise. Total time 12:59. I did drop a note in the suggestion box requesting my gym get an actual pull-up bar to augment to two "wide grip ergonomic things" they have attached to two of the universal stations. Those things suck.
Posted by Mike at 12:13 PM 1 comment:

Stairs, how I hate thee.

I want some warm weather and early morning sun, dammit.

Before the day got away from me without getting either of my workouts in, I decided to switch my Wed routine w/Thurs. My wife has a swim sched for Thurs morning, and it's easier for both of us to get to the pool at 5 freakin' a.m. in this miserable weather when we have each other to bitch to. So, today was back squats x 7. Warmed up on the ERG for 5 min, and found my way to the squat rack. Worked my way up from a warm up set of 5x135#, to a second of 5x185#, and then started my reps. Did the first rep @ 235#, second and third at 255#, and then 4-7 at 265#. I feel like I could have gone higher, but since I had no spot and a questionable foot I played it safe.

Question for Max- traditionally I am a "ass to calf squatter". Meaning I'll go all the way down on the negative until my butt touches my calves (paying attention to knee position). In order to do this without falling over backwards I'll put a 35# plate flat behind each leg and rest my heels on it. I lift less weight this way, but feel as if I get a better workout through the full range of motion. Since starting w/crossfit I stopped doing this, and now stop the negative just before my knee's reach 90 deg (or as close as I can get without feeling like I'm going to go over backward). I tend to like the ass to calf method better, but am wondering what your guidance would be?
Posted by Mike at 8:19 PM 3 comments:

Moose is home! For those who don't know, he was out at doggie boot camp for 4 weeks. Pic of the day. I call this "Running to Knowledge" Heh. (Library of Congress in the background): 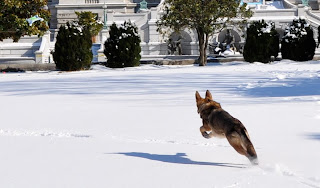 Mike
Washington, DC, United States
I'm a father/husband/son/brother, a former Marine pilot, and generally a pretty decent guy (Unless you are ignorant, rude, Chuck Bass, or intellectually lazy. Then I turn into a jerk.)